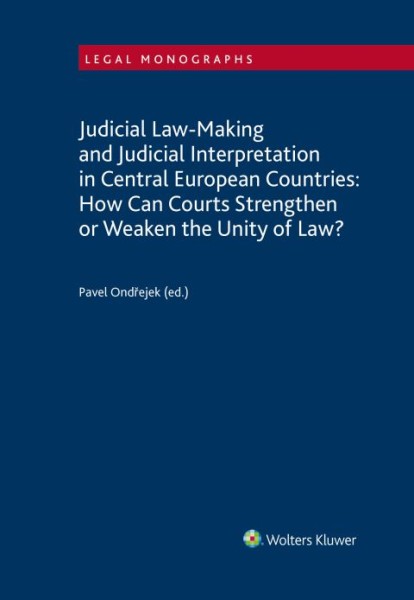 This book reflects on the changing role of the judiciary in Central Europe. From among the many problems associated with the position of courts in contemporary states, the authors focus on various questions of how the courts' decision-making can reinforce the overall coherence of the law, rather than contribute to its fragmentation. These questions are as follows, for example: What role can be played by the way judges use interpretation methods in terms of strengthening or weakening the law as a system? Is it legitimate for the courts to formulate, in their decisions, general principles and rules which have a potential to impact a very broad circle of future cases? What is the role of courts in strengthening the unity of law in relation to the other branches of government, and to international bodies and institutions? The first part of the book focuses on the theoretical and doctrinal foundations of judicial law-making in Central European countries. The authors deal with topics concerning the relationship among the judiciary, the constitution and statutory law; legal casuistry, as opposed to a systemic approach to law; judge's decision-making in a situation where there is no a priori regulation; and the role of settled practice in terms of the traditional doctrine on the sources of law. The second part then deals with pro-systemic and anti-systemic effects of judge-made law and judicial interpretation; this part also tackles the issues of maximalism and minimalism in judicial decision-making; judicial law-making with regard to constitutional complaints; coherence of law in connection with retrospective effects of case law; and finally, the legitimacy of evolutive interpretation in the light of the principles of human rights protection developed by the European Court of Human Rights.

"I consider the reviewed collection of studies to be an extremely valuable and noteworthy volume, which will certainly be of interest not only to legal theorists, but also to legal dogmatists and practitioners. The preparation of this book in English by an international team of authors gives high hopes that the book will initiate a much-needed discussion on the law-making by courts and interpretation of law as instruments of ensuring coherence and uniformity of law."
Prof. dr hab. Monika Florczak-Wątor
Faculty of Law and Administration, Jagiellonian University in Krakow, Poland

"This book is proof that Central European lawyers have abandoned the outdated view that the law is only made by the legislator, while judges serve only as its mouth. At the same time, the book shows that legal scholars from Central Europe develop in an original way various concepts produced by analytical legal science and fruitfully place them in the context of their social environment. This publication has the ambition to appeal especially to readers interested in judicial studies, analytical jurisprudence, and comparative law."
Doc. Mgr. Marek Káčer, Ph.D.
Faculty of Law, Trnava University, Slovakia